The Process and Advantages

1.Air is pumped though ducts positioned along the outer perimeter of the drill pipe. It travels down to the drill bit at the bottom of the borehole.

2. The air exits near the bit’s cutting knives to build pressure at the bottom where the borehole has been newly cut.

3. Resultant high pressure breaks up and suspends cuttings in the drilling fluid. The mixture flows into the low pressure region inside the center of the drill pipe.

4. Drilling mud and cuttings travel all the way up the drill pipe interior and exit out into a flooded collection pit at the surface.

5. Drilling fluid, under the force of gravity, exerts an outward force against the borehole that contains it. These outward forces increase with increasing depth and act to keep the walls of the borehole intact and the hole open. 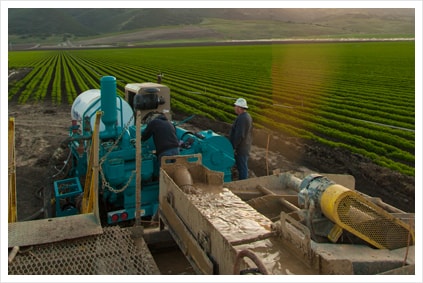